Dylan Bernard’s most recent single, “Flames,” is inspired by the ending of a long distance relationship. The video for the single, which you can check out here, debuted recently as well.

“[‘Flames’] came from a very real place because [the relationship and breakup] actually happened. Aside from that, in the song, we’re both trying to make it work, but we ultimately decide to end it before the relationship goes down in ‘Flames.’ The song paints such a vivid picture to begin with, so it wasn’t hard to come up with a concept. More so, it was harder keeping the “less is more” aspect and keeping it as honest as possible without confusing the fans and viewers and incorporating different elements to help explain every emotion portrayed.”

Naturally, a situation like this is perfect for writing about true feelings. Dylan explains how he shows his feelings best…

“I’ve always been someone who wears their heart on their sleeve, so on stage and when I’m writing, I paint a picture of everything happening in real time. As the song continues through the lyrics, I try to connect with the energy of the song as best as I can. It really brings the audience in and amplifies the emotion.”

With music coming straight from the heart, it is easy for fans to connect with Dylan’s inspiring lyrics.

“The support [from fans] in itself has been amazing. Seeing all of the positive comments have been amazing, but there have been a select few that really connected with the video and the song by saying that it brought them back to a place where they ‘felt free.’  That comment made me feel so good. If the music can make you feel something, especially feel free, it really gets me ready and excited to create and release more music for the world.”

With fans meaning so much to him, Dylan loves sharing his music by performing live.

“I really enjoy the nervous feeling I get before I go on stage. But, the moment where you walk out on a stage when your name is called or just in general, to perform for an audience. Waiting for the music to start and feeling the beat go through you. Nothing beats that feeling.”

As Dylan grows as an artist, he has a major goal in mind.

“My top goal would definitely be something I’d have to wait on. I just want to leave a mark on the world with my music. I plan on remaining honest with myself and everyone around me, telling my story and bringing people together to relate and possibly heal.”

To accomplish his goals, Dylan posts a lot of covers on YouTube, but picking the songs to cover can be difficult!

“Recently, I’ve gone straight to Spotify’s “Today’s Top Hits”, or “Chill Hits” playlists. I look for my favorite artist’s newest release and see if it fits with my voice and resonates with me personally.”

Working towards his goals, Dylan has already accomplished a lot.

“Reading all of the comments when the [Flames] music video was finally released was amazing. It was the first time all of my fans could come together and really tell me what they thought of the song and the video combined. The quality of it has been the highest I’ve ever released thus far in my career and I know it’s only just begun, so to have this experience so early on has been incredible.” 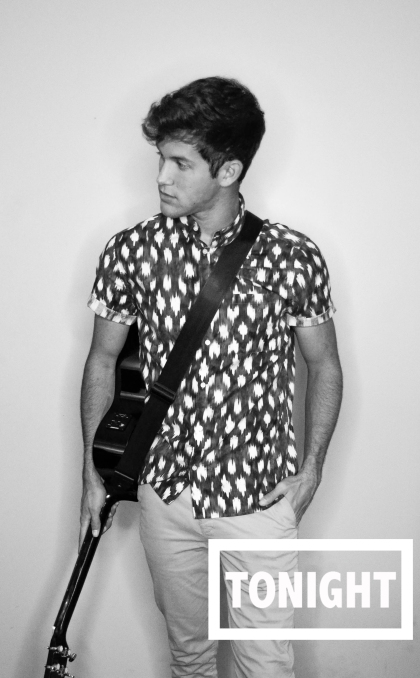 Tonight also did a Photo Session with Dylan Bernard which you can check out HERE.